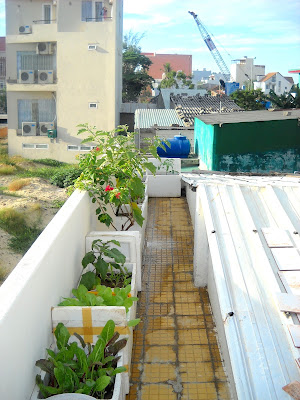 So, here I am, some 17 years after I last plowed and harrowed a field in the Shenandoah Valley of Virginia behind a marginally trained Quarter Horse in harness, and some 25 years after last hand-spading an expansive garden mulched with peanut hulls in an oceanfront community in Virginia Beach, trying to figure out the logistics of growing veggies on a rooftop in Da Nang, Vietnam. Well, as you can see from the above photo, I clearly don't have a lot of space to work with--only a narrow tiled pathway between a low masonry wall and a pitched metal roof that that I access from the doorway of my second floor bedroom. So, space is at a premium and the sun, during our eight month long summer, can be relentless. Vegetables are grown on a strictly seasonal basis in the countryside surrounding Da Nang--the relevant seasons being the wet season and the dry season. The wet season brings floods of amazing depths that no vegetable crop could withstand. It does, however, bring new soil from the mountainsides and also recharges the soil with moisture. Once the floods recede, crops grow beautifully in the fields--until, that is, the summer sun turns everything to toast. Low lying paddy fields in many areas are set up to accept the controlled inflows from irrigation channels in order to produce rice during the summer months. Higher lying fields, or fields situated in non-irrigated areas (close to salt water, for example) generally produce only marginally once the summer heat sets in. I figured, since my veggies are situated on the second floor of a house in a well-drained neighborhood in Da Nang, in a place blessed with both running water from the city, as well as ground water issuing from a hand-operated pump that we recently installed in our front courtyard, that floods and drought were irrelevant for us and that we should be able to produce fresh produce all year long. I thought that our only concern would be to ensure that my rooftop garden was well-watered and that I could produce a cornucopia of foodstuffs with minimal effort.

Study that picture once again. I'll also mention that it is situated on the south side of my house and that there is no structure to the east to shade my house in the mornings. I've got ten styrofoam crates of soil, mixed with composted cow manure (all of which had to be transported via uncounted motorbike trips from the surrounding countryside and carted up the stairs to the second floor because we live on a sand bar, two blocks from the South China Sea.) The crates--which were used originally to transport fruit, and are generally recycled to haul fish and also to serve as refuse containers--utilize my narrow strip of potential garden better than any traditional flower pots. The soil is certainly deeper than it would be in normal gardening containers and I do water religiously, allowing time for the chlorine in the city water to off-gas in five-gallon buckets for a day before I use it. (We refilled our freshly cleaned goldfish pond with city water straight from the tap one day and the chlorine level on that particular day killed all the fish in a matter of hours!) Plants start off great in my roof-top containers and leafy veggies (lettuce, Swiss Chard, and mustard greens) produce well. The tomatoes, eggplants, and zucchini started off well also, and produced copious amounts of foliage--but little to no edible fruits. So, what's the deal?

I've got several hypotheses, including airborne emissions from a near-by rubber plant and my failure to water deeply enough at first. The chief suspect, however, based on observing the results of our failed attempts to grow beans in our front courtyard and greens in our mostly shaded clothes drying area, is one that I never would have anticipated here in the sunny tropics, where pale Caucasian skin can burn to blisters in short order: insufficient hours of direct sunlight.

While it feels like summer for most of the year (although, interestingly, it's not as hot here as it was in the US last summer), our day length is a mere twelve hours long, year in and year out. Now consider that my crops are not out in the middle of a sunlit field, but are situated on the floor of my rooftop. Even though the sun rises here about six AM, the low eastern wall prevents the sunlight from striking the soil surface in those styrofoam crates until around nine AM. And then, after about 3:30 PM, the soil surface is shaded once again--first by the adjoining metal roof, and then by my neighbor's house to the west. While the ambient air temperature is quite hot out on that rooftop and the intense sun makes it supremely uncomfortable to stand there in the middle of the day, it seems that the abbreviated day length that the plants sitting on the surface of that tiled walkway experience is insufficient for them to produce fruit and is merely adequate for leaf production.

Which just goes to show that, if you are serious about food production, you had better start experimenting and learning from experience in your own unique setting. You're not going to learn all you need to know from a book or a class or even from your own experience gardening elsewhere. Don't plan on waiting until the SHTF to start gardening. Start now, and learn from your mistakes while there is still time. It would take a rare and dedicated person in an ideal situation to produce all the carbohydrates that their family requires. I never was able to do that, even on my little Shenandoah Valley farm--chickens ate my emerging wheat, geese ate my black-eyed peas, and I impaled my hand on a rusty wire while hanging seed corn from the barn rafters in an abortive attempt to follow seed-saving instructions that I found in an ancient Agricultural Extension Service booklet. Your best bet, for the immediate unknowable future is to stockpile a LOT of grain (rice works for me) and to try to grow greens to supplement that basic carbohydrate source with vitamins and minerals. Swiss chard grows well in the summer without bolting to seed and kale is extremely winter hardy. Both will continue to produce, or at least survive, into the winter in the temperate zone if you protect them with a cold-frame and--protected-- can take off growing in the spring before anything else gets started. 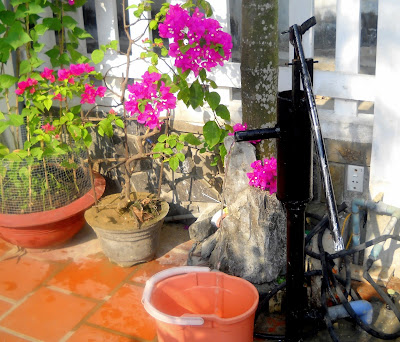