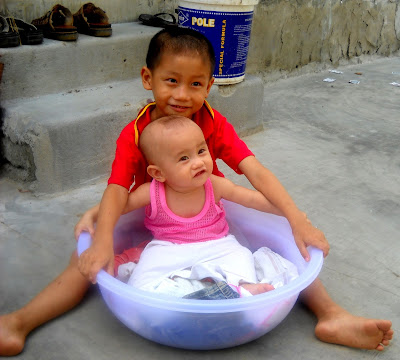 Let's talk about laundry! It seems to me that those collapse-conscious folks who don't ignore the topic of laundry either anticipate a grueling regime of boiling clothes with home-made lye soap, beating clothes on a rock in a stream, or else getting used to living in filth and squalor. Hard as it is for folks to believe who grew up with the convenience of automatic washers and dryers and listening to tales of the bad old days of starch and lye, wringer washers and/or boiling vats--there is a completely different, totally reasonable, tradition of clothes washing which I've observed over the time that I've been in Vietnam.

Let me preface this by saying that this alternative tradition works best when you make a few other modifications to your life style as well. The Vietnamese people that I first encountered in 1995--as well as many now--generally have two sets of clothing and don't utilize the standard Western top sheet/bottom sheet/pillowcase style of bedding. (This would have been typical of Americans and Europeans in earlier, less affluent circumstances as well.) Vietnamese people, in general, pay a lot of attention to personal cleanliness. I have rarely encountered anyone with noticeable body odor and even soiled clothes are unusual aside from mechanics and masons who are actually on the job. Footwear is customarily removed at the door and feet, as well as the rest of the body, are typically washed before one retires to bed at night. On hot days, people make every effort to avoid being out in the heat at mid day and often take a quick shower at mid-day to cool off. So, right off, you can see that homes and bodies are kept pretty clean here.

Although clothes dryers are almost unheard of, I've never seen a dedicated clotheslines out in the middle of an open yard here either. Drying clothes in our hot, dry eight-month long summer is pretty straight-forward: clothes are generally hung on hangers and then suspended on wires along sunny walls, or on metal clothes racks on balconies or in breezy hallways where they dry quickly. In the rainy season, when the only breaks between downpours are oppressively humid, it gets a bit trickier. Clearly, you need a sheltered spot to hang the clothes. Even then, however, clothes probably won't get 100% dry. (That's probably the number one reason we don't use closets here--everything would get full of mold and mildew.) Spacing out the suspended clothing and using an electric fan to move the air can be helpful. Also, using an iron to press the clothes can eliminate residual moisture. You can see, however, that having an abundance of extra clothing and bedding to store is not necessarily an advantage in a perennially damp environment.

Right now, Vietnam is in the midst of an economic boom and middle class folks are buying refrigerators, water heaters and washing machines right and left. But prior to this time, EVERYBODY washed clothes by hand--and it was a casual, everyday affair--not some arduous task left for mom to do one day a week. It's something typically done at the same time you wash yourself up, either in the bathroom or out at the well. Even in the 1980s, when folks had barely any money and Vietnam was under a US-imposed embargo, folks put up the money to buy a bit of detergent--and they used it in cold water. That's something to realize--soap may require hot water to be effective, but detergent does not, especially if you're not dealing with a heavy amount of grease or oil. All you need is a basin, some water, detergent, and a brush. If you're using a plastic or metal basin instead of a sink or a bathtub, it allows you to readily utilize that waste water for some other purpose (cleaning the floor or watering plants, for instance) and is convenient if your normal home plumbing (incoming or out-going) is either not functional or if the tub and sink are otherwise employed. Of course, this style of washing works the best if you've already mastered the Asian Squat! 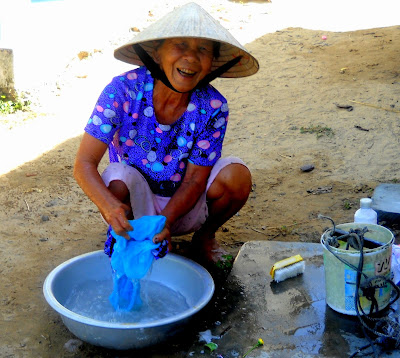